Here's some restaurant, entertainment and educational venues from around the Jupiter area and close to Jupiter Bay. 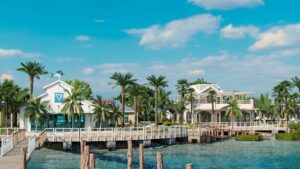 Three new restaurants and a seafood market were built along Love Street in Jupiter’s Inlet Village. The waterfront project, which opened in mid-January, is called Charlie and Joe’s, named after football icon Joe Namath and developer Charles Modica.

The restaurants include an oyster bar and beer taproom named Lucky Shuck, a modern American grill called Beacon, and a rooftop tapas bar known as Topside.

This casual restaurant, offering views of the Jupiter Lighthouse, focuses on oysters and other raw seafood. Its full tavern menu also includes a fresh-catch of the day in a variety of preparations, Southern Gulf-inspired dishes (fried chicken, ribs, and gumbo), burgers and other pub-loving sandwiches, salads and snacks.

Fishing boats pull up to the docks just outside Lucky Shuck, and commercial fishermen unload and weigh their fresh catch in view of diners. The fish and seafood they bring supply not only Love Street’s three restaurants but also the Tacklebox seafood market, which is located at the entrance of the Lucky Shuck oyster bar. Here, visitors can pick up freshly caught fish and shellfish to prepare at home. They can also opt for grab-and-go side dishes, pokes, sandwiches, and salads.

The taproom component provides a diverse selection of craft beers on draft, bottles and cans.

This dinner-only restaurant is the complex’s fine-dining spot. It sits next to Lucky Shuck, just across a heart-shaped courtyard, and has spectacular views. The restaurant’s centerpiece is an open kitchen ringed by a dining counter that offers customers a view of the chefs at work. Beacon’s menu focuses on local seafood with Mediterranean-inspired preparations (bouillabaisse, gazpacho, paella and pastas.) There are also options for meat-lovers including steaks, chops and chicken.

This rooftop bar, sitting above Beacon, provides a full tiki experience. A retractable roof delivers the complex’s most dramatic al fresco experience and views. The rooftop menu might be described as fun tapas. Bites range from charcuterie and cheese boards to sliders and flatbread to wood-fired skewers cooked over a robata grill. And there is a slate of tiki-style cocktails for sipping. 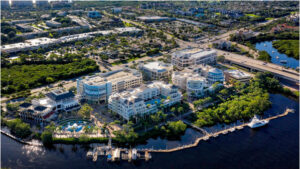 The Town of Jupiter and Harbourside Place have resolved event violations including car shows, yoga classes, green markets, farmers markets and concerts.  See article on the "Florida News" page of this website.

With settlement of its litigation with the Town of Jupiter, Harbourside will stress outdoor dining and small gatherings as a way to rebrand itself. It will reduce its retail space by 71%, and use the extra space for offices, bars and restaurants. The plan also calls for de-emphasizing the live music performances, limiting them to 10 per year.

Kravis Center for the Performing Arts 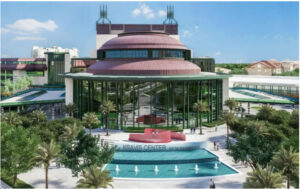 Rosemary Square, located in downtown West Palm Beach, is the center for dining, shopping and entertainment.

Fountain Shows on the Plaza.

Enjoy the eco-friendly show fountain on the Plaza, sure to dazzle you with a choreographed performance to music every half-hour, daily. 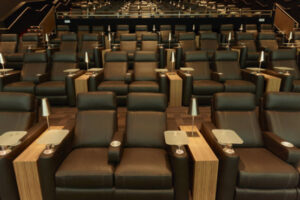 The Shoppes at Jupiter is home to Cinepolis' first hybrid location. The movie theater, which opened on June 19, 2015, offers two unique auditorium concepts in one cinema, “Cinépolis Luxury Cinemas” and “Cinépolis.” 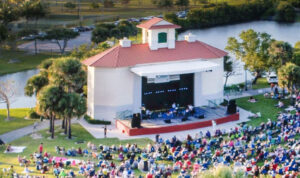 Seabreeze Amphitheater is a medium-sized entertainment facility located in Carlin Park, and hosting up to 2,000 patrons for theater, concerts, tribute bands, and community fundraisers.

Seabreeze Amphitheater is the home to the Palm Beach Shakespeare Festival, now in its 24th stellar season of bringing high quality theater entertainment to the community. Thousands of County residents have enjoyed the opportunity to see live theater in park setting which is made possible through a partnership between Palm Beach County and the Shakespeare Festival. 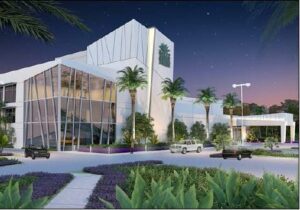 The former Burt Reynolds Dinner Theatre, on the northwest corner of State Road A1A and Indiantown Road, underwent $2.5 million in renovations and two-years later a $25 million expansion. The expansion added 62 extra-wide seats in a second-floor lounge, expanded the lobby, built executive offices on the second floor, installed 10-foot-high windows on the east side and boosted the size of the restrooms.

A second major expansion, originally set to begin in April 2021, is occurring during the COVID-19 pandemic shutdown while the theatre is without performances. This $36 million expansion includes a new Broadway-scale stage that qualifies the theater for pre-Broadway and national tour-development productions, and a 199-seat second theater space. The theatre also expanded its Goldner Conservatory, home to the Maltz’s youth arts education program, and redesigned its entrance and lobby. Audience members now can dine at the new Scene Café, and floor-to-ceiling glass windows were installed on the theater’s three floors.

Due to the latest construction schedule for the Theatre's $36 million expansion, this season lineup has changed (see below).

The newly renovated and expanded theatre will not be open in time for its previously scheduled fall performance of Murder on the Orient Express. In fact, both this play and Big Hit Broadway Musical are being replaced with Jersey Boys and Sweet Charity, and the first two performances of the 2021-2022 season will be held off-premises. 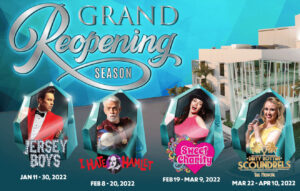 The latest season lineup is as follows:

Annual attendance at the Maltz doubled to about 100,000 in 2019 from about 10 years ago. Subscriptions, where customers buy tickets to about five shows a year, increased from about 2,300 to about 7,600 during that same time. 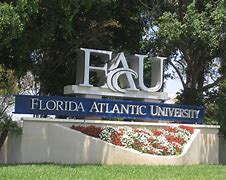 Register early to get the courses you want, as some classes fill up rapidly.

Taught by FAU professors and distinguished guest lecturers, course offerings include such varied subjects as foreign policy, political science, film, music, art history and literature. The Lifelong Learning Society was established to provide adults of all ages the opportunity to enrich their lives through non-credit, university-level courses with no homework or tests. 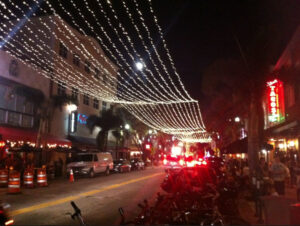 Clematis is a street in downtown West Palm Beach bustling with activities. It offers a collection of some of the best restaurants, from Asian inspired to casual fine dining and everything in between.

Clematis Street is a great place to visit on a Thursday night when there's live entertainment, and where there are festivals on weekends. Great music, lots of good vibes and happiness.

The pier is a two-minute walk and so beautiful to relax on. 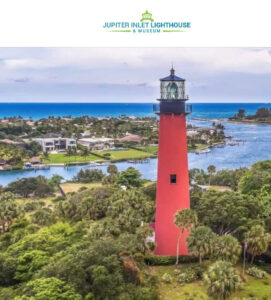 The Jupiter Inlet Lighthouse & Museum is operated by the Loxahatchee River Historical Society. It has a museum and gift shop and offers tours to the top of the Lighthouse.

The Jupiter Inlet Lighthouse and Museum offers climbing tours of the landmark 1860 Jupiter Lighthouse and exhibits in the waterfront History Museum located in the restored WWII Naval housing quarters building.

Prices are: $12 for adults, $10 for US Veterans & Seniors 60+, $6 for children ages 6-18, and free admission for children 5 & under. Admission includes Museum exhibits and Lighthouse Tour. Children under the age of 16 must be accompanied by an adult and must be a minimum of 48" tall to climb the Lighthouse. Please allow 2 hours to visit the site and trail. 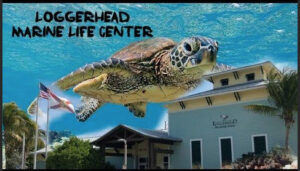 The Loggerhead Marinelife Center, located at 14200 US Highway 1 in Juno Beach, is one of Florida's most visited nonprofit scientific destinations focused on ocean and sea turtle conservation.

For over three decades, LMC has been committed to the rehabilitation of sick and injured sea turtles. LMC’s advanced hospital, founded by The Gordon & Patricia Gray Family, is one of the leading facilities in the state and a prime resource for sea turtle rehabilitation. It features a surgical suite, upgraded x-ray room, blood work lab, endoscope, and ultrasound – allowing numerous sea turtles to be examined and treated at LMC.

Loggerhead Marinelife Center is undergoing improvements and a Capital Expansion at this time. During this construction phase, our work rescuing and rehabilitating sea turtles will continue, and the animals in our hospital will continue to receive the highest quality care available. Notice: Our Outdoor Sea Turtle Hospital will be closed to guests Monday – Friday from 10:45am – 11:15am and 12:15pm – 12:45pm until August 9th to accommodate visiting field trips. 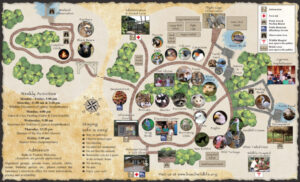 Busch Wildlife Sanctuary, located at 2500 Jupiter Park Drive (just 13 minutes from Jupiter Bay) provides a home for injured animals.  The entire Sanctuary is little over 6 acres of nature trails and boardwalks. Visitors can schedule their arrival around the Sanctuary's many weekly programs:

The Busch Wildlife Sanctuary's wildlife hospital is available to receive injured animals Monday - Sunday from 8AM to 5PM.