Major condominium association changes are made through Homeowner and Board of Director voting.

It's therefore very important for Owners to understand condominium voting concepts and procedures and to elect representatives that support the Owners' interests.

This webpage provides the following important voting and election-related information: 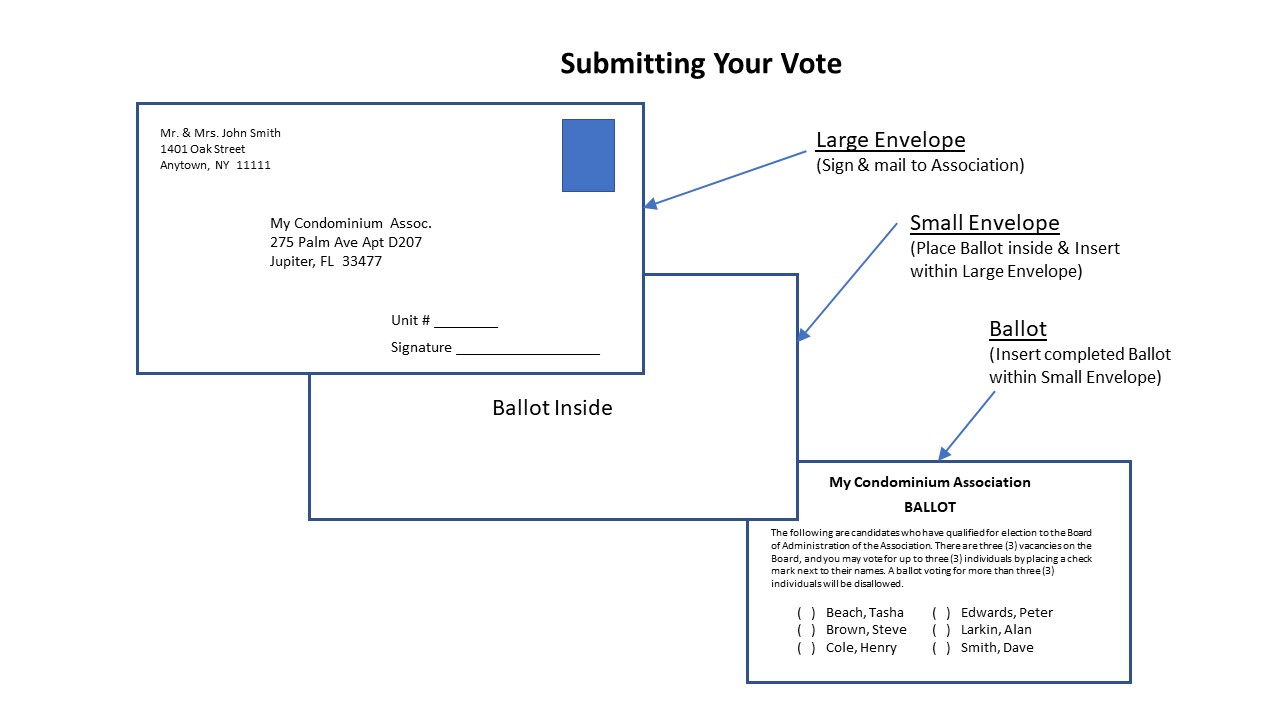 The following chart summarizes procedures prescribed by the Condominium Act for electing board directors: 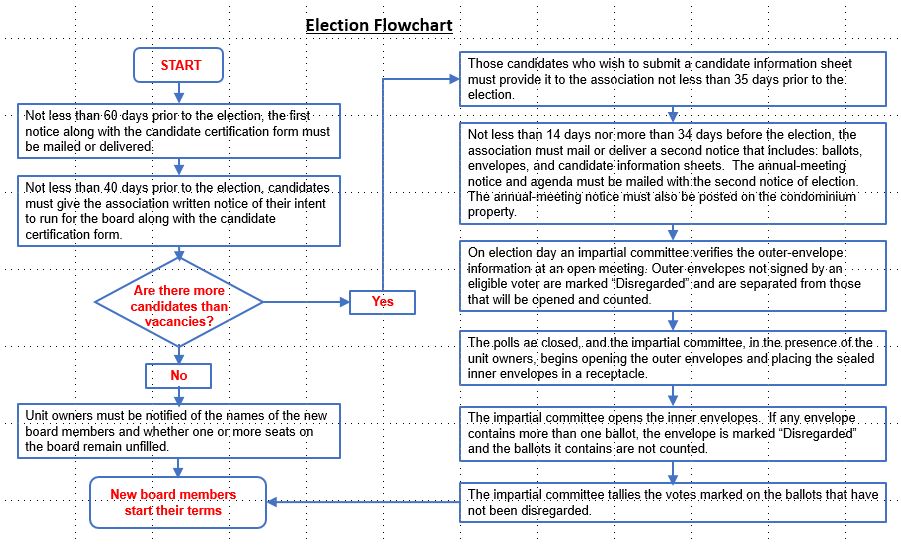 Unit owner decisions are required for votes taken to do the following:

Some Unit Owner voting can be done through the "Consent to Action" process.

An Organizational Meeting is the first meeting among the newly elected or appointed Board Members, which is held after the Owner’s Membership Meeting for the purpose of electing Officers.  The Association’s bylaws (paragraph 4.5) require the meeting to be held within ten days of the election at a place and time fixed by the Directors; however, it’s common practice to hold the Organizational Meeting immediately after the Owners’ Meeting.  This meeting must be properly noticed and this notice is usually placed in the membership meeting notice package as a separate notice. Per Florida statutes, the meeting must be open to all owners.

Four Officer Positions are filled.  Per Florida Statute 718.112(2)(a), a condominium association’s “Board of Administration shall be composed of five members, except in the case of a condominium which has five or fewer units, in which case the Board shall consist of not fewer than three members. The Board of Administration shall have a President, a Secretary, and a Treasurer, who shall perform the duties of such officers customarily performed by officers of corporations.  Unless prohibited in the bylaws, the Board of Administration may appoint other Officers and grant them the duties it deems appropriate.”  In addition to the three Officer positions mandated by Florida statutes, the Association’s bylaws provide for a Vice President, who “shall exercise the powers and perform the duties of the President in the absence or disability of the President.”

Election of Officers.  It’s Jupiter Bay’s practice to elect Officers from among the Directors. However, the Association’s bylaws (paragraph 6.1) say that none of them need to be Directors, and in fact Officers need not be Unit Owners. Although Association members elect the Directors, the Officers are elected solely by the Board of Directors, and there’s no requirement that the Board base their decision on number of owner votes received, owner preferences, prior position(s) held, or qualifications for the position. Generally each Officer position is held by a separate Director; however the statutes allow for a person to hold more than one office, except that the President may not also be the Secretary. No person shall sign an instrument or perform an act in the capacity of more than one office. Directors may not vote by proxy or by secret ballot at Board Meetings, except that Officers may be elected by secret ballot. A vote or abstention for each member present shall be recorded in the minutes.

Order of Business.  An Organizational Meeting is conducted in the same manner as a Board Meeting following a similar agenda: